Three weeks ago, I believed that the nebulous contours of DP2 fit well with the desire, expressed by many of my classmates, to break out of the stylized (step-by-step, non-iterative) design process followed in the course of DP1. Today, exactly a week before our final presentation, it has become clear to me that freedom comes with responsibilities. The main challenge, as I see it, concerns empathy. A wise man recently told me that the key to good empathy is time – time that builds relations that build trust. But, what if time is one of the few things the d.school cannot provide?

In the face of a task as broad and complex as, “Address a way to build community identity and responsibility in EPA”—that is, in a community that is not your own and that you (may) know incredibly little about—doing good empathy work is a challenge in and of itself. The complexity of the task and the little time at our disposal thus compounded each other. In order to tackle this problem (and in order to overcome itchy idiosyncrasies developed in the course of too much time spent at the d.school – mostly having to do with white boards divided into quadrants) we found ourselves drawn to ‘themes’ rather than ‘users.’ In other words, we unpacked our interviews with an eye to the similarities, rather than the differences that characterized our potential users.

We then selected what can be termed a ‘proxy user’ for our main insight – talent doesn’t cycle back to EPA: if youth NGOs like Live in Peace or MAP are successful, talented kids will leave the community; if NGOs are not successful, a kid’s potential is more likely to go to waste; either way, the process does not reinforce the community in the long run. I term our selected user a ‘proxy user’ to distinguish the source of the insight from the source of the need – a distinction that is critical to the design process and to which I will come back in a moment.

Based on this insight, we came up with a set of potential solutions and went back to EPA for more empathy work. I should note that our precise task was to prototype and test an ‘out of the box’ solution and a ‘less out of the box’ solution. At the end of an afternoon in EPA testing the ‘out of the box’ solution, I discovered that a) the kids I talked to had a much greater sense of community than I have ever had; b) I was shamed into thinking of going back to Italy and give back to MY community and c) it became clear that our ‘real user’—that is, the source of the need—is a pretty specific set of people. But does such a user exist in EPA?

And here is where methodological issues concerning the design process – issues that I struggled hard to shelve for a while – slapped me in the face again. If we solve the ‘patchy empathy’ problem with the ‘proxy user’ solution, then we might run the risk of arbitrarily designing for a need nobody really has. And this is slightly disturbing. In the absence of a user, are we brazenly betraying the heart and soul of the design process – the human-centered element?

Perhaps not: the fact that we did, in the end, find a user is less a result of sheer luck and more a product of the fact that every step of our work is based on a close reading of the transcripts from our interviews – or at least we like to believe as much.

As this experience draws to a close, the freedom of experimenting with the process turned out to be a real ‘cake’ and allowed to test the design process—its advantages and hazards—further. But now it’s time for me to call my user and with a bit of luck set up an interview… keep your fingers crossed! 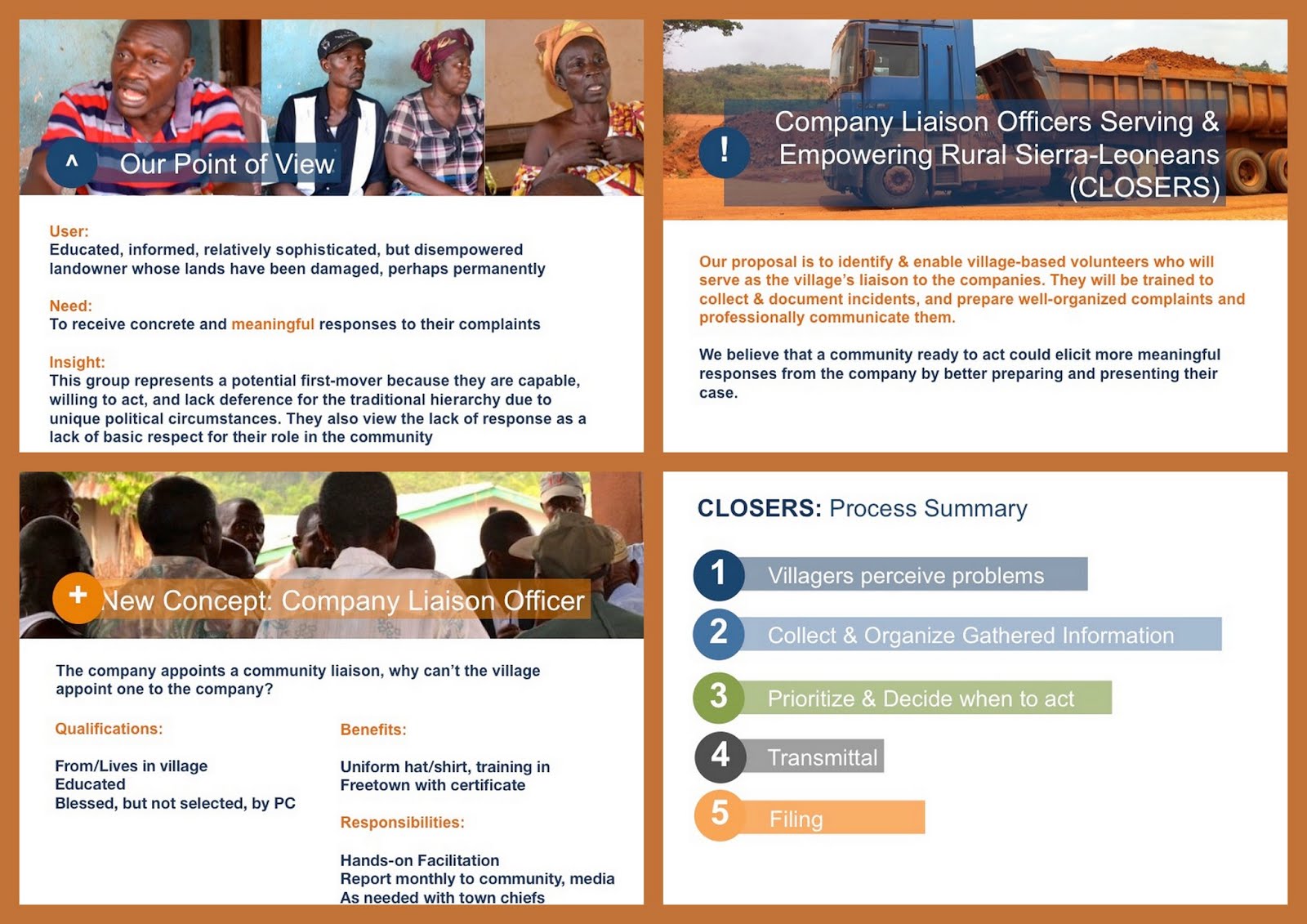 The various steps of CLOSERS were built on a number of assumptions.  The following summarizes the three most important assumptions, as well as the prototypes we propose to test them.

As we reflect back on DP1, we feel fortunate for how much we’ve learned over the last several weeks, but we’ve also found that some parts of the design process were more useful, generative and productive than others.  For example, both the needfinding and unpacking were instrumental, not only to bring the entire team up to speed around the SL empathy work, but also to develop insights about what our users wanted. The brainstorming, mind mapping, and process charting were also very useful frameworks to organize those insights, especially given the complexity of the landscape and the difficulty of the problem we were attempting to address. However, we continued to grapple with the big gap between identifying needs and being able to design for those needs–a gap made inevitable by the nature of the problem and the constraints on our design project.  The assumptions we had to test were as much about whether other factors in the system would allow a program like CLOSERS to exist as they were about whether landowners would use such a program.

We’re deeply indebted to our partner Simeon Koroma for his generous input and passionate engagement throughout the process.  Structuring the projects as design challenges that might be used by Simeon and Timap added an entire dimension of richness, integrity, and passion to our design work.

We leave this first design exercise with some hope and a few big questions.  We’re all sold on the idea that no one has great ex-ante solutions for fixing complicated development problems–if they did, the record of international aid would look very, very different than it does.  As designers, we have seen how moving the subject to the center of the intervention might empower the subject; we have also seen how designing with and not merely for a community makes the design work feel more honest and just.  We resonate with the design thinking methodology absolutely in concept; we still, however, have some questions as to its applicability in real contexts where implementation, scalability, and sustainability are key.

Our most pressing questions revolve around the utility of design thinking writ large in governance reform, as development has to do with how you would reshape relationships between donors and recipients.  Rapid iteration and focusing on problems and users rather than on pre-conceived solutions are very logical approaches.  However, how would an NGO or a development program actually market this to donors?  Donors are themselves accountable for their money, and it’s hard to see how they would choose among multiple groups submitting bids to design around a particular problem, but with no promises of what the solution would be.  Additionally, one of the virtues of the design approach is that it can uncover new needs which might supersede the ones initially being investigated–but how can one square this kind of flexibility with the need for financial accountability?

Does design thinking only make sense with a venture capital sort of finance model where failure is frequent and considered a normal part of the game?  Traditional funding paradigms of organizations that have to justify their spending decisions to taxpayers or to charitable givers might not mesh well with the high probability of failure and the idea that you should get it wrong a lot before you get it right. In an era of budget cuts and austerity in many donor countries, the problem becomes even more pronounced.  Individual billionaires with private foundations could be first-movers in endorsing this sort of approach, but what about agencies that are accountable to taxpayers or donor governments?  While it’s not impossible to sort these issues out, the broader space of how governance and development efforts get funded must be addressed before design thinking can help “reboot government” in a meaningful way.